Stated and Derived Importance - Is it a Mistake to Ask Customers What's Important?

At the risk of stating the obvious, marketers care about what’s important -- what’s important to customers relating to products, messages, and brands. Understanding what is important, however, is easier than understanding the why and the how of importance. More specifically, market researchers usually talk mainly about two kinds of importance: stated and derived. We tend to think this view is oversimplified, however, and that it actually interferes with truly understanding customer behavior. In this article, we’ll review stated and derived importance and then discuss why we think there’s more to “importance” than meets the typical researcher’s eye.

So, let’s begin with stated importance, which essentially amounts to letting consumers tell us what matters – as in, which product or service attributes they feel are important. Pretty straight forward stuff. Market research is a rarely without complication, however, as there are multiple methods to get at stated importance, including rating scales, Q-sorts, constant sums, unbounded scales, magnitude scaling, maximum differential scaling, and so on. Researchers generally agree that among these, maximum differential scaling is the most effective.

On the other end of the spectrum, derived importance arises specifically from consumers’ behavior and the factors that predict their behavior. The better a product feature (or brand attribute, etc.) predicts decisions, the more important that feature. As with stated importance, numerous statistical methods are available to compute derived importance (which, go figure, turns out to be harder than you might think to do correctly -- but that’s another article).

Although often correlated, stated and derived importance differ in several ways. First, attributes which are said to be important may not actually predict behavior because they are similar across all alternatives. Here’s an example: Is a remote control important to TV buyers?

Probably any survey would confirm that consumers prefer TVs with remotes, but inclusion of a remote would not predict which TV is purchased -- because all TVs come with remotes, right? The stated importance of remotes would not match their derived importance. A second reason that stated and derived importance are different is the inherent irrationality of human decision making (see, for example, Sway: The Irresistible Pull of Irrational Behavior by Ori and Rom Brafman). Attitudes and behaviors are often only weakly correlated with behavior, if at all. That is, what people say is important rationally may not be what predicts their irrational decisions. Finally, stated importance is affected by social desirability. Socially acceptable attributes tend to have higher stated importance, but predict behavior only weakly. For example, good gas mileage and low emissions may be rated as important in a car, but that has not stopped many Americans from buying SUVs and sports cars.

In a given study, researchers are able to capitalize on the differences or similarities between stated and derived importance to bring about actionable conclusions. For example, attributes high in derived but not stated importance may be key competitive differentiators, whereas attributes high in both may be critical requirements necessary for customers to continue to consider services or products. For whatever reason, market researchers rarely go beyond a straight comparison of stated and derived importance. In particular, they overlook the possibility that there is a set of causal relationships among attributes. Consider the example below, adapted (and simplified) from an actual study and real data. 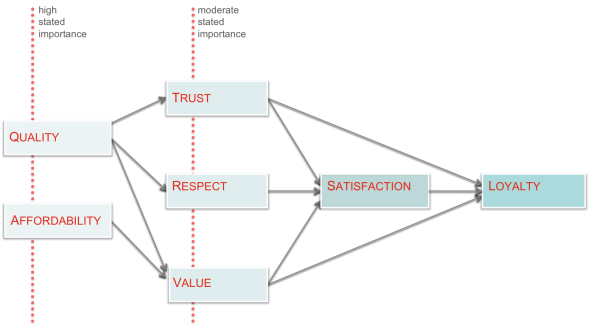 The model fit the data very well and indicated a very particular pattern of relationships among the attributes of quality, affordability, trust, respect, and value as predictors of two outcomes: satisfaction and loyalty.

1. Without understanding the full model, we would conclude that three attributes had derived importance with respect to satisfaction (trust, respect, value), but only two with respect to loyalty (trust, value). As the full model indicates, however, assuming that respect is not related to loyalty would be a mistake. The key insight is that respect indirectly affects loyalty (through satisfaction) but is nevertheless a critical driver.

3. Affordability had low stated and derived importance. Without the model above, we might have mistakenly concluded that affordability was unimportant. Instead we see that affordability is a key secondary driver of value. Although quality turned out to be much more important, affordability cannot be overlooked as relevant to satisfying customers.

4. We might have considered satisfaction and loyalty to be two distinct outcomes, but in this study, loyalty was a result of satisfaction -- not a parallel or independent outcome.

The four examples above are some of the insights that arise from going beyond standard notions of importance and understanding a broader model of customers’ attitudes and behaviors. Certainly, stated and derived importance -- as typically conceived -- are valuable concepts in understanding customers, and in some studies, are sufficient by themselves. In some cases, however, we need to go beyond stated and derived importance and get to a more complex view -- a view that produces additional clarity and understanding of customers.

The particular technique used to produce the model -- structural equation modeling -- allowed us to understand the complexity of the relationships among the seemingly disparate attributes. That insight gave our client both a better understanding of what to act on and also a clearer picture of the results their actions could have. Through the proper application of these similarities and differences, researchers will discover that importance is best not viewed in a vacuum; taking the new step of analysis can have a significant impact on your results -- and your actions. Put simply, gaining a complete picture of how importance matters to customers and actually drives outcomes (not just satisfaction in the example above), could materially affect what you as an organization focus on to make improvements. We’ve observed repeatedly that incomplete representations of what customers deem important may yield a list of improvement priorities -- and those priorities can be vastly different than those resulting from a more complete picture (as illustrated above). So, be sure you have the complete picture before taking action; otherwise you could be focusing on the wrong things!